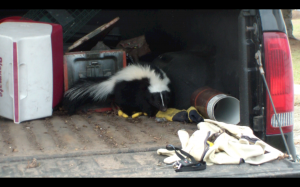 The skunk is most known for its black fur and white stripe lining the center of its body from the snout to the end of its tail. The colors of a skunk may vary from black and white to brown grey, and few skunks are even cream colored. All skunks are striped from birth but have also been seen with two thin stripes or many spots.

Skunks have excellent smell and hearing but have very poor vision. After ten feet the skunk has little clarity of any object.

The mating season for the skunk is usually in early spring. The males will mate with multiple female skunks. The female skunk having a gestation period of about 66 days and will give birth to about four to seven baby skunks (kits). The kits are born blind and deaf. It takes up to three weeks for the skunks to open their eyes after birth. The kits will hang around their mothers for about one year after birth.

It is known to be rare for a healthy wild skunk to go around a bite humans. If a skunk is charging and biting at a human it is possible for that skunk to have some sort of illness such as rabies. The skunk is known to spray at an enemy as a defensive move to protect its self or kits from any sort of harm. Not only can this smell be very strong and take a long period of time to get rid of but it may also cause a temporary blindness.

The life expectancy of a skunk usually does not exceed three years, most of these skunks will only live long enough to see about a year. Causes of death can vary from other death of other animals to the death of cars on the road due to their bad eye site.

The skunk is an omnivore, meaning that it eats both plants and animal organs. Its eating habits of a skunk may change as the seasons through the year change. Skunks are known to eat many things such as insects, worms, grubs, rodents, small reptiles, birds, animals eggs, and even grass, fungi, nuts and berries.