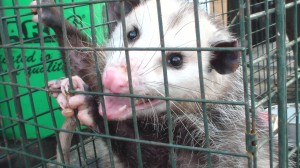 The opossum is the only marsupial mammal of North America. Mama Opossum will carry the young in pouch for up to 2 to 3 months and piggy back them for an additional 1 to 2 months!

Many people have found holes dug underneath their porch, garage, deck, or even backyard shed and have seen coming out of those holes a light colored fury animal with a rat tail and a pretty grin like the one shown above. Well that rat tailed fury animal happens to be our friend the opossum! Opossum are known for digging underneath such structures and even garbage cans! The opossum will eat just about anything and go through many procedures to get at chosen foods. Most opossum removals consist of using a live cage trap on the outside of a home but we have ran into many cases where opossum removal jobs needed more immediate action in the removal portion due to the opossum coming through the doggy/kitty door and were found in the living area of a home, in which the opossum removal was done by a catch pole or even removal by hand! Opossum removal is best done by live cage trapping them on the outside of the home using just about any foods to attract their attention. If you have a opossum issue and need assistance in opossum removal please call: