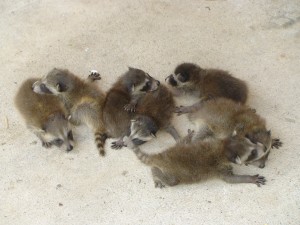 The North American Raccoon or also known as “coon”. The raccoon has distinct features from other mammals in North America. Having its masked face, ringed tail, and thick coat of grayish fur it makes it quite easy to tell this animal apart from the other four legged mammals running around in our region.

The raccoon is known for wooded areas with many trees. Making it easy for the raccoon to climb a tree and steer clear of predators. They are known for housing in underground dens as well. Also wanting to be close to water or marsh areas which provide the necessity’s for survival. Many of you may know the raccoon to house themselves in the middle of the city, inside buildings or even the walls and attic of your own home!

The raccoon is known to be a very omnivorous animal. This meaning it has a wide variety of food in its diet. Foods ranging from insects and worms, fruits or nuts, fish, eggs, cat/dog food, and as many of you may have experienced…your garbage.

In the wild, the average raccoon usually lives from about one and a half years old to about three years old. Those numbers depend on the surroundings of the animals territory it roams. Hunters, trappers, and traffic have a large influence on the death of the raccoon. Other things that influence the deaths of these animals would be distemper, predators such as the owls, bob cats, or coyotes, and even the fight for survival. Many times half the batch of new born may not make it to see their first year of life. Many young raccoon will be of loss of their mother and become weak with no guidance and experience in finding food which results in death of starvation.

The mating season can be in the late winter or early spring and can be somewhere around two months in length until birth. The littler size is usually from two to five kits in a batch. The kits are born deaf and blind. They open their eyes for the first time about three to four weeks after birth. The kits do not start eating solid foods until about six to nine weeks after birth. After eating solid foods the mother takes this time to show the young the way of life, feeding, housing, den areas, and by fall the group may split up. It is not unusual to see yearling stick with the group.

Many people think of the raccoon as a pest. This is because many occasions people will have encounters with this animal digging through the garbage, making a disgusting mess by shredding through everything you’ve thrown in there throughout the week. Another reason may be because the animals digging up your lawn, looking for underground food. People have found raccoon’s helping themselves to dog/cat dishes outside or even letting themselves in through the dog/cat door and finding them in their kitchen. A costly encounter people have with these animals is them housing under your roof. Cases increasing from soffit panels being ripped out of the way for entry, to even the animal ripping shingles off the roof and coming straight through! From there they are able to make themselves at home, which also means having to use a laboratory. These animals do designate a certain spot in your attic to leave their feces and they are very stinky animals. Them urinating and leaving their droppings up there can cause damage to the insulation. The feces can carry diseases such as the roundworm which is caused by contaminated objects or foods entering the body. DO NOT underestimate the raccoon. This animal has impressive strength and intelligence and should be dealt with before any further issues occur. If assistance is needed feel free to call: