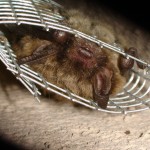 When people think of bats they either think of vampires, or they think of tons and tons of bats flying from out of a cave after being disturbed. The cave theory is indeed accurate but it does not end there.  Bats will have different types of roosting areas, one for the day, one for the night, one for nursing their young, and maybe even a hibernation roost all depending on what temperature is most comfort for them at a given time. These roosts can be found in many different areas aside from an actual cave. That cave may be substituted by a hollowed out tree, underneath bridges, and extremely commonly found in attics or walls of buildings and homes. Though bats are said to be animals that participate in the hibernation and migrating process. Don’t be completely fooled by the terms, as we have seen geese and ducks walking around on the iced over lakes.

After the mating process between a male bat and a female bat, the females then part from the males. The females tend to roost up in a colony with other female bats; this is where they sort of have a nursery. These female bats will roost in the same location together, this is typically where the newborns are born, and raised up. Upon experience, we have found that the baby bats are usually between late May and into June. Every female bat will tend to have one newborn per year. Gestation of bats can take up to about 60 days. It takes a few weeks after birth for these bats to learn how to fly on their own and about a month after birth these bats can grow to the size of the other adult bats.

The Little Brown Bats and Big Brown Bats are both known to feed off insects. These brown bats will sweep through the air snatching up things like flies, mosquitos, moths, gnats, and many more.

The Little Brown Bat and the Big Brown Bat can live anywhere between 10 to 20 years, if not, than more. The lives of bats may be shortened due to other animals preying on them for feed. There are a low number of bats that actually suffer by carrying rabies.

Though winter is here, you can still be proactive with your bat removal issues. If you are experiencing bat issues at any time of the year, we can help! Bat removal and bat prevention work should not be procrastinated and should be taken very seriously as the issue can only worsen. Call County Animal Control for your first step toward eradicating your bat removal issue. 608-259-6515 for Bat removal services.